The Search for the Golden Boomerang (1941) by Laura Bingham 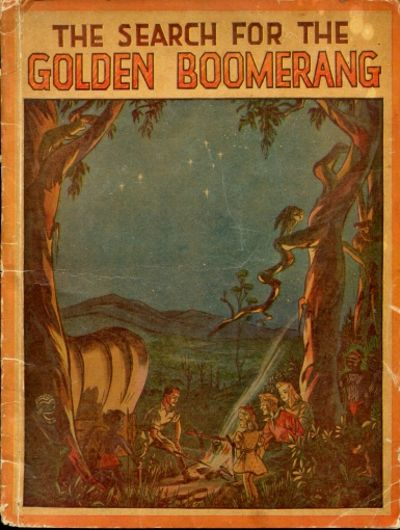 When I started to look into Australian Pulp one area that I wanted to look into was Australian Old Time Radio.  I'd found a few reference books and one of the series I read mention of was The Search for the Golden Boomerang. I looked for copies of the serial on-line with no luck (I'll have to have another look for them)  but the other day I was in Archives Fine and Rare Books and I saw a copy of this tie-in book from 1941.

I grabbed it to find out more about the story.  The serial and the book were aimed at children and tells the story of  a young Aboriginal boy Tuckonie and his search for the golden boomerang.  I was surprised to see an Aboriginal lead in the 1940's (although Arthur Upfield's Bony series  starting in 1929 had an Aboriginal lead)

I'm presuming that each chapter was based on a episode of the show which ran for about ten minutes if what I've read on the internet is correct..  Tuckonie is looking for the golden boomerang to help his tribe as legend has it that the boomerang brings prosperity to the tribe.  Tuckonie meets up with the Harvey family traveling to search for gold - reading the story it was set in the 1940s  there are cameras mentioned in the stories as well as trucks,

Along  the way, an Aboriginal spirit Ng'rui Moch and his medicine man try to stop people searching for gold.  While Tuckonie is inclined to believe in the magical powers of the spirit world, the father John Harvey is much more sceptical and in reading the story John Harvey seems to be the hero.  Indeed it is Harvey rather than Tuckonie who discovers the true nature and identity of Ng'rui Moch.

The story is quite simple as one would expect from a children's radio show and book but I enjoyed it and I want to track down some of the 1440 episodes of radio show that had John Meillon (better known as Wal from the first two Crocodile Dundee movies) as the voice of Tuckonie as well as the further books that were written based on the show.

The book also features gorgeous colour plates and I wish that the book wasn't so fragile so that I could scan some of the pages here.