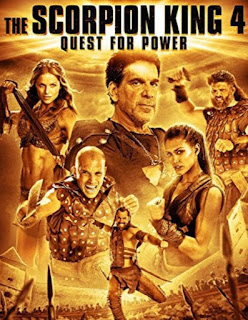 Victor Webster returns in this the next Scorpion King movie.  There is an another reference to The Scorpion King being a campfire story, a legend.

This movie could take place before three or after (I have to admit that there's part of  me that enjoys the idea that the chronology goes 2,1,4,3)

I do kinda like the idea that we are getting legends of The Scorpion King each one is a standalone story with the Queens he has met and wooed.  Each adventure begins as a blank slate and Mathius is alone fighting as a mercenary, fighting for  a kingdom and winning over a queen only to start over in the next movie.  Chronology doesn't rellay matter.  Heck if he is immortal (as hinted in 2) then it may be a longer period between movie and he queen has died of old age.

Mathius has been training an apprentice Drazen who in a scene that gives a nod to Raiders of the Lost Ark betrays Mathius. and the ending references Last Crusade
Given Indy's influence on the Mummy movies that should come as no surprize.

It's an enjoyable movie with The Scorpion King fighting his old protege who has framed him for the kiiling of the king and the hunt for a legendary King's crown.
It's a fun romp that's enjoyable as long as you don't take it too serious.
Posted by Brad Mengel at 10:55 PM No comments:

Email ThisBlogThis!Share to TwitterShare to FacebookShare to Pinterest
Labels: The Mummy, The Scorpion King

The Scorpion King 3:The Battle for Redemption 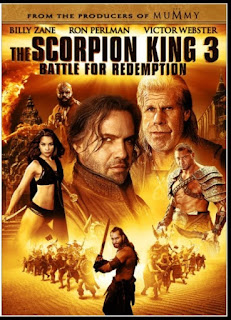 Webster most natby had been in Mutant X and Continium He's fine in the role not as muscular as The Rock but he can hadle himself in the fights.

The kingdom Mathius gained in the first movie has falled and Casandra has died,  we see Cassandra as Matthius remembers his wife and it's shots of Kelly Hu from the first movie.

Matthius has returned to being a mercenary and is hired by King Horus (Ron Pearlman).  Horus is facing rebellion from his brother Talus (Billy Zane).  Horus has sent the Book of The Dead to his ally King Ramusen (Temeura Morrison) and Talus is attacking Ramusen to get the book.

Matthius is sent with a Teutonic warrior Olaf,  the pair make a good team.

There's a good plot were we discover that the book can release Warriors and they challenge Mathius and Olaf in a battle.

There is a suggestion that The Scorpion King is a legend.

The movie is enjoyable and ends with Mathius getting a new wife and kingdom.
Posted by Brad Mengel at 9:25 PM No comments: