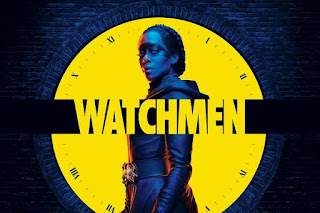 Well what a show. Nine episodes and a complete story. Sure there were some dropped threads but generally speaking all the big questions were answered. There are going to be spoilers, don't say I didn't warn you.

We open in 1921 with the Tulsa race riots. America like Australia has moments in history that they should not be proud of. The Tulsa massacre was a real event but we don't find out the significance of it until later, several commentators have pointed out that the Tulsa massacre is in effect the destruction of Krypton. And serves as the traumatic origin of at least one character.

But that was not readily apparent and took several episodes to tie it all together. I didn't mind but it did create a little confusion as we jump to nearly a century later in the present day and I was trying to find the link. But I was rewarded but staying with the show – the sixth episode focussed on the first of the costumed adventurers Hooded Justice.

And the show succeeded in sending me back to the graphic novel to see if the revelation of who Hooded Justice was under the mask was plausible. Truth be told I have a couple of doubts. Fistly in Under the Hood, Hollis Mason says that he heard Hooded Justice openly support Hitler – not something that I would expect from the African-American Will Reeves. There is a hint that the German propaganda Will’s father brought back from World War I might account for this.

Next the actor they choose for 1930s Will Reeves seemed a little small to be Hooded Justice who shares a build with circus strongman Rolf Moller. I could make explanations that Mason was deliberately obscuring Hooded Justice's identity but that feels like I have to do too much damage to the Graphic novel.

Also Will is a man with a wife and child (and we need the child as we discover that Hooded Justice is main character Angela Abar's grandfather.) He is in a homosexual relationship with Captain Metropolis and as a beard for that he's swanning around with Sally Jupiter the original Silk Spectre on his arm. It's too much but for the TV series to work with the comic but for Will Reeves as Hooded Justice to work we need all three to happen. The latter two being what we knew from the graphic novel which the creators assured us was canon. (The TV series wisely doesn’t bring Sally Jupiter as a beard into the episode)

Another thing that bothered me as reread the graphic novel, the similarity of Hooded Justice’s origin to the first Nite Owl, both were cops in the same city at the same time, both read Superman comics and were inspired to put on costumes and fight crime. Now similar origins in comics aren’t unusual (Batman and Johnston McCulley’s The Bat – both of whom created their crime-fighting identity after a bat flew through their window). So it’s not impossible for it to play out that way but it doesn’t help my suspension of disbelief.

Ultimately, when watching the episode it seemed plausible enough and I am being really nit picky. I have to admit I loved the whole show.. The show has multiple callbacks to the graphic novel.

The official tie-in Petey-pedia allows from interesting expansions to the lore of the world. Interestingly, with the Sister Night centred episode – Angela Abar took her name from a movie of the same name. Agent Petey’s memo about the movie expands about the origin of the movie and how it falls in the “Black Mask” genre which is a hybrid of Blaxploitation and Superhero movies. Now Angela’s surname Abar was niggling at the back of my mind I was sure I’d heard it before in a similar context and Agent Petey mentions Sister Night (1977), The Black Superman, Tarantula and Batman. The latter birthing a legion of click bait articles “Batman exists in Watchmen” It was the Black Superman that finally reminded where I’d heard her name. There is a real 1977 Blaxploitation movie called “Abar, the First Black Superman” (renamed “In Your Face” for VHS release in 1990). I’d presume that this was the source of Det. Abar’s surname. 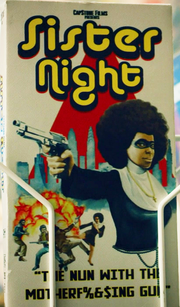 Rereading Watchmen the graphic novel, while watching the TV series was equally rewarding. In Adrian Veidt’s interview in the back matter of issue 11 Adrian mentions the Seventh Cavalry. The context is completely different from the one seen in the show but one wonders if that was the source of the name (equally did Veidt form the 7th Kavalry to help discredit Rorschach )

I should mention the new characters primarily introduced though the Defence of Police Act. After the Seventh Kalvary attacks on police officers this act was introduced to allow police to wear masks and conceal their identities. The regular beat cops wear a yellow mask on their lower faces and detectives are allowed to create their own identities – the series focuses on Det Angela Abar’s Sister Night and Looking Glass, the latter’s origin tied to the ending of the Graphic novel. Red Scare, Pirate Jenny and Panda all appear but are background characters if there is to be a second season a focus on these characters would be welcome.

The TV series is a worthy continuation of the world of the graphic novel. If this all we get I can’t complain .
Posted by Brad Mengel at 11:33 PM No comments: