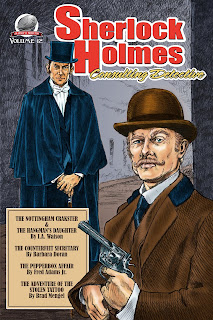 Airship 27 Productions is thrilled to announce the release of the 12th volume in their internationally recognized bestselling series, “Sherlock Holmes – Consulting Detective.”


Why do people cheat, rob and murder?  Why are people tempted to commit dark deeds?  These are the questions that have always plagued the great detective, Sherlock Holmes. In this, the 12th Volume of the best selling series, Consulting Detective, he and his faithful companion, Dr. Watson take on five new cases that will challenge their intellect and lead them through the twisted minds of nefarious souls.


“The demand for our new Holmes mysterious has never waned since we began the series almost ten years ago,” says Airship 27 Productions Managing Editor, Ron Fortier. “And in that time, those devoted Holmes fans have recognized the consistent quality of both our stories and art featuring Arthur Conan Doyle’s famous characters.”


All the art for this volume was provided solely by Airship 27 Productions own, award winning Art Director, Rob Davis. For the first time in the series, Davis delivered detailed pencils only for each illustration and also produced the stunning color cover. “This one is clearly a collector’s item,” Fortier smiles. “Fans of the series are not going to be disappointed.”


From chasing after a notorious confidence man to solving the death of a twin; a stolen tattoo or a murder of a bride before her wedding day, writers I.A. Waston, Barbara Doran, Fred Adams Jr. and Brad Mengel have produced truly remarkable mysteries  guaranteed to keep Holmes and Watson fans up late night.


Available now from Amazon in paperback and on Kindle.