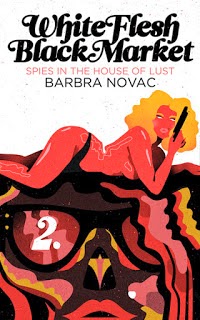 The second book in this series picks up from where the three agents are on assignment. Aston is undercover with the Russian Mafia and meets up with Vicar Irk.  Porsche is in Monte Carlo trying to get in with Clon Daedalus and Mercedes infiltrates Daedelus' island base.

In this instalment, the three agents really get into their assignments Aston discovers just how much the Russian Mafia knows and that they have the a waitress who witnessed the massacre at the start or part 1.  Porsche manages to get the attention of Clon Daedalus and manages to snoop around his papers.  Mercedes infiltrates the island making several discoveries.

I found that Mercedes's adventures are the ones that stay with me the most - that could be because she is confronted with the physical reality of what the other two only find written reference to.

I just realised that Aston sleeps with Irk and Porsche has sex with Clon - Mercedes doesn't have any sexual encounters in this part.

And I am seriously hanging out for the release of part 3.
Posted by Brad Mengel at 9:43 PM 5 comments: 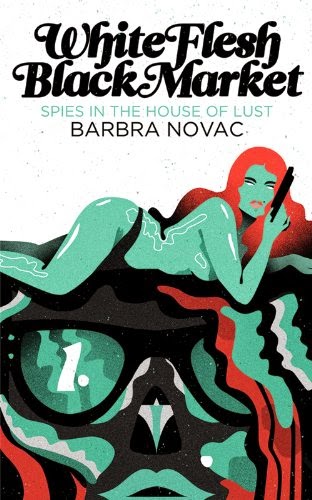 So you might be wondering why I started the Sexy September tag here on the blog and reposted several of my old reviews that covered some of the more risqué books.

Well it turns out that I'm not the only one fond of sexy heroines fighting crime or spying.  The Baroness Yahoo Group suggested these books.  The Baroness is a definite inspiration for this book as is Modesty Blaise and Mrs Peel (from The Avengers TV series)

Mercedes Merlin - Waif like red haired model, an orphan who travelled and trained in China.

The first instalment introduces the agents and gets them into their various assignments as the villain is suspected immediately.  I felt a little disappointed at the end of this volume as it felt like the story had just gotten started, the players all in place.  Porshe was meeting with Clon Daedalus, Mercedes arrives on his private island and Aston is undercover with the Russian mob who are looking to buy Daedalus's technology.

Barbra Novac does a really great job introducing the main characters and giving us several sex scenes that felt were part of the plot and not just thrown in for the sake of having a sex scene.

Posted by Brad Mengel at 9:29 PM No comments:


Welcome to Conversant USA, the premier counter industrial espionage agency. This private agency was founded by Vanessa “Nessie” Court. Ms Court became a world class scientist working with her first husband Roberto Bandini who died in a lab accident and wealthy after the death of her second husband and son by terrorists from Chechnya. Vanessa Court found and killed the men responsible for the death of her family and found that she enjoyed the action and excitement and formed Conversant USA to use her unique skill set.

In Hot Rail to Hell, Conversant USA tracks down the person responsible for stealing the blueprints of a new hot rail gun for use by the United States Military. The Conversant Team races around the world to prevent the blueprints from being delivered to a foreign power.

I was really impressed by this book, Robert Vardeman has turned out an exciting and sexy new story that calls to mind the best of Modesty Blaise and The Baroness and is hopefully the first of many books. Vardeman is an ideal writer for this type of series, he contributed an unpublished Baroness adventure back in the seventies and he discussed with fans of The Baroness what they liked about the series.

While Baroness Penelope St John Orsini and Vanessa Court share very similar backgrounds, Vanessa is her own character. While The Baroness dealt with devices that were science fiction back in the day, some devices are everyday items now, Vardeman takes Nessie and offers similar cutting edge scientific devices.

I purchased the deluxe edition which features an essay by the author about how the book came about and a short story “Deserts, Death and Drugs” showing an earlier adventure of Conversant USA chasing down stolen medicines. There is a neat twist to just who is the bad guy in this scenario.

There are sex scenes in both Hot Rail to Hell and “Deserts, Death and Drugs” but there were part of the plot and not tacked on like similar scenes I’ve found in similar works. (I felt that some of the sex scenes in The Baroness #1 The Ecstasy Connection were merely there for the sake of a sex scene).

Vanessa Court is a worthy “granddaughter” of Modesty Blaise and well worth reading.
Posted by Brad Mengel at 10:12 PM 5 comments:

Wealthy from this union, Su-Lin avenges her husband's death and discovers he was a top intelligence agent. Su-Lin then takes over his network and becomes a freelance agent. In this adventure Su-Lin is between assignments when she is contacted by an old friend who alerts her to a cloning technique called Quantum Growth which can make a full grown copy of any person which is up for sale.

I won't spoil the ultimate surprise but Su-Lin discovers much about herself as well as stopping a plot to clone the world's leaders. The novel is also known as Man Made Woman.
Posted by Brad Mengel at 10:15 PM 5 comments: 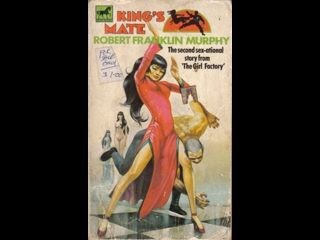 This is the second and final novel in the Girl Factory series and Su-Lin Kelly is back in action. This time she is investigating the disappearance of a Russian biologial weapons expert who is also a chess champion. Everyone is concerned that Zuchev has been abducted and is being forced to create biological weapons for some terrorist group so Su-Lin is called in by The Nest to investigate.

The Nest is run by Sam Gruber and Ella Crumm and is that pair know more about what goes on in the world of espionage that the head of the CIA. Perhaps if the series had progressed we would have learnt more about the Nest.

Su-Lin discovers that a number of other chess masters have disappeared also and uncovers a secret chess tournament hosted by Prince Komoroff, ruler of the Island of San Caligua. I won't spoil nature of the games or the fate of losing players.

Quantum Growth, the cloning technique shown in the first novel makes an appearance here after Su-Lin underestimates one of her opponents.


I'm sad there were only two in this series but I'm glad of the two that we do have.
Posted by Brad Mengel at 10:44 PM No comments:

There seems to be a prohibition of sex in this movie similar to the American prohibition on alcohol in the 30s but this is never spelt out in the movie. But without this explanation much of the parody notions don't quite work and I spent much of the movie figuring out the Prohibition angle trying to make the parody work. (I know, I know watching a porno for the plot and trying to make it make sense, what am I thinking) Had they made Dexxx a Nyphomaniac hunting other nyphos and giving them some satisfaction back to "normal" sex drive this might have worked better for me.

But back to what worked for me

There is a distaff version of Lt Doakes, Lt Strokes who has lesbian sex with Dexxxter - parodying/mirroring the connection that Doakes is like Dexter.

Dexxter has panty collection instead of a blood slide

Overall as a parody it is somewhat confusing.

How about the sex? Dexxxter is only involved in two of sex scenes in this movie and others are fairly random.
Posted by Brad Mengel at 10:25 PM 3 comments: 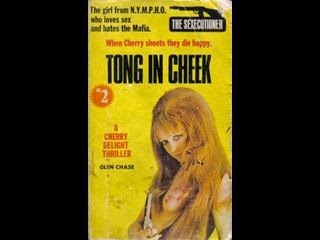 I first discovered this series when I was just getting into the Executioner so it was a natural that I would pick up this series.

The Sexecutioner is Cherry Delight agent for N.Y.M.P.H.O. (New York Mafia Prosecution and Harassment Organisation), whose as good with a bazooka as she is with her bazoombas.

In this book (which the spine of my copy has Tongue in Cheek) the nympho agent, er N.Y.M.P.H.O agent has to kill three Mafia gunmen before they can make a treaty with the Chinese Tongs. Luckily for Cherry her targets like to visit sex clubs and brothels allowing her to display her talents. Mack Bolan never had to shag a mobster so hard that he was too tired to fight back, but Cherry does in this adventure.

If your looking for something a little different give the Sexecutioner a try
Posted by Brad Mengel at 10:39 PM 3 comments: