Maybe ten years ago or so, I found an issue or three of Black Diamond.  The cover of issue 1 declared "Sybil Danning is Black Diamond."

The centrespread talks about how Black Diamond was a movie created by Mike Frankovich Jnr to star Sybil Danning.  The first I'd heard of Danning, that I recall paying attention to her ( she was in Battle Beyond The Stars with George Peppard but I don't recall her).  Her filmography certainly suggested that Black Diamond would have been a good fit for her.  A female spy kicking ass sweet.

The idea would be that the comic would be a promitional tool with the comic serving as exposure for the characters.  The Comic debuted in 1983.  I hadn't seen the movie and I couldn't find any reference to the movie,  there was no IMDB page or anything.

I did some searching, there are a couple of different stories as to why the movie never got made - firstly Danning hurt her back.  Which would have been a bit of problem in an action heavy movie.  But her back healed and she made other movies since then.  A later search revealed that there was some sort of rights issue with the character - the articles I read weren't entirely clear.

For whatever reason, the movie never came out and the Black Diamond comic ended with issue 5, with the character appearing in a couple of AC comics titles like FemForce and Colt.   The promised Black Diamond Comic Novelette never appeared.

The first issue's editorial says that Danning contacted Bill Black of AC comics to put him in touch with Mike Frankovich Jnr (Danning and Black had earlier discussed Sheena with Black and auditioned for the Tanya Roberts Sheena Movie)  The five issues were original stories based on the movie and the Comic Novelette would presumably have been an adaptation of the screenplay.  Issue 5 mentions that Black Diamond might become a TV series - it didn't.

(side point there have been a tonne of unused scripts for movies Kevin Smith's Superman, Joss Whedon's Wonder Woman, etc why not turn them into comics?)

The comics are pretty good issues 2-5 have gorgeous Paul Gulacy covers (not Bill Black's cover to issue one is bad but Gulacy is just next level.) 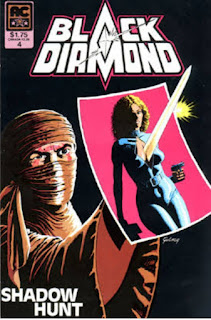 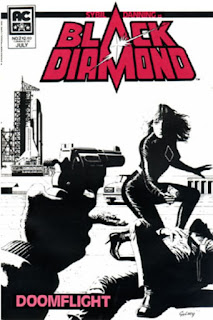 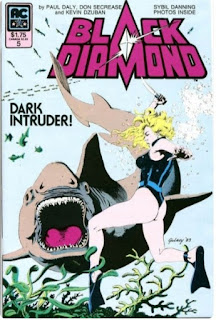 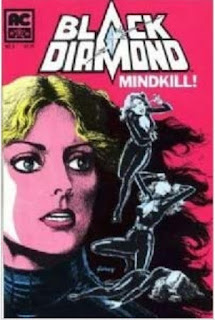 The first three issues are a three part story The Darkfire Affair, where Infocom spy Tiana Matthews battles her opposite number Vanessa Cord, codenamed Darkfire and her all female mercenary team, Valkyrie Unit - in three different encounters.  These really fun spy capers.  Issue 4, has Tiana Matthews seaching for the killer of several agents and the final issue has Black Diamond searching for what might be a UFO.

Posted by Brad Mengel at 3:33 PM No comments: