Oddly for a year where I did a fair bit of writing the only thing published was "The Roads not Taken." in More Blood: A Sinanju Anthology - available in paperback now from Amazon!  Subtle Plug I know.  What's it about?  The basic idea is that while in Viet Nam, Remo first hears the legends of the Masters of Sinanju and what he thinks they are like.  I manage to include references to several other paperback vigilante series, TV shows and movies  I actually wrote this back in 2005 for the New Blood Anthology So it's interesting to see how much I've grown in the decade or so between then and now.

So what did I write this year?

For DREAMER'S SYNDROME: NEW WORLD NAVIGATION  edited by Mark Bousquet, I wrote "The Case of the Hooded Shark".  This is set in the same universe as Mark's DREAMER
S SYNDROME novels and short stories/  The basic premise is that God gave an order that everyone got to live out their dreams of what they wanted to be at ten years old.  Naturally Mark's stories only cover a small part of the world and this anthology opened up for other stories taking place around the world.  My starting point was at ten I was obsessed with teen detectives, The Hardy Boys, Nancy Drew, The Three Investigators, The Dana Girls and Trixie Belden, so I created a character who wanted to be a detective. I gave him a "Watson" an ex-military man, the idea for him was he had dreamt of being in the army at ten - joined at 18 served around the world and came back from Afghanistan with PTSD and found a new dream job.    Then the world changed and he finds himself back in the army.  I played with a lot of Holmesian tropes as well as the nature and perception of Australia. Part of my inspiration was the Taiwanese news coverage of The Buxom Bandit

The idea that she would ride a kangaroo to a robbery just made me laugh.
Next up was "The Adventure of the Empty Throne" for Chris Sequera's SHERLOCK HOLMES AND DR WHAT?  which had Sherlock Holmes working with a Doctor other than Watson.  I had Holmes working with Guy Boothby's Doctor Nikola to investigate a plot to destroy the British Empire.  I used another Boothby creation as the villain and referenced some EW Hornung.  Thankfully The Hooded Shark got the Study in Scarlet references out of my system and I was able to craft a different take on the Holmes/Nikola fused universe.  Nikola is a great character and I will return to him one day, as I will with  Sherlock Holmes.
I'm not sure if I can share Paul Mason's awesome and amazing artwork for the story. (but I got the original for Christmas and there's a picture on my Facebook page.
I also wrote "The Domino Lady's Triple Threat" for Airship 27 which looks like it will appear in Domino Lady volume 2.  Domino Lady versus the American-German Bund who are keen to kidnap an old friend of Ellen Patrick's father.  I took inspiration from the opening of the Sydney Harbour bridge in 1932.  I slipped a few classic and new pulp references into the story and some ancestors of my favourite characters. 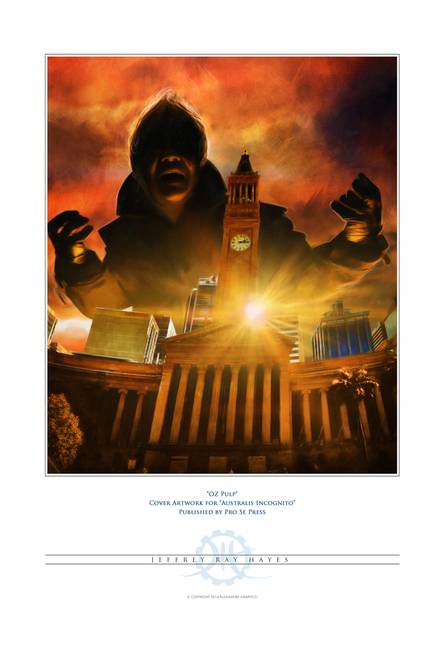 That brings us to the final three and a bit stories which form my own shared universe that I call "Australis Incognito"  (Above is the awesome cover painting by Jeffrey Hayes a print can be bought here.
The first story that I wrote (mostly in 2013) was Risqué: Strip Poker which introduced my 1920s Sydney vigilante Risqué.  A lot of the inspiration for her and this story came from Underbelly: Razor true crime series that ran on the Nine Network here in Australia.  (I recommend watching if you get the chance, Sydney in the 20s feels so pulpy - it's also an odd time where the two big criminal gangs were run by women Kate Leigh and Tilly Devine.)  Think of this as a prequel to the main Australis Incognito series.  I subtly foreshadowed a couple of things that will become important in the main series.  This story will be published in POKER PULP by Pro Se Productions
(As an aside I also wrote a short comic story featuring Risque's daughter Jasmine who works as a spy in the 1960s under the code name Risqué Brent with her partner codenamed "Flynn" as a homage to Modesty Blaise.  I submitted the story to Ashcan, a Brisbane based comic book anthology but it didn't find an artist.)
The first contemporary Australis Incognito story I wrote was Bus Bait Blues starring The Question Mark.  The Question Mark is a young woman who investigates why a Russian mob boss would be in a bar picking up a girl fresh off the bus.  Of course she discovers a much larger criminal conspiracy.
The Second story "Thunderstruck" features the third generation Risqué facing against an opponent who can appear anywhere at will.  the only way you know you've been hit is the sound of thunder and a calling card that reads "You've been Thunderstruck".
The third Australis Incognito story "The Rusting Death" is currently being written.  The title came from the misreading of a Doc Savage adventure The Rustling Death.
These are part of Pro Se's Single Shot line of stories and will be published in the near future.
﻿
Posted by Brad Mengel at 8:34 PM 10 comments:

After reviewing the TV adaptation I was asked if the story fit with Wold Newton Continuity.  I said yes but I'd want to read the novel first.  So off to the library I go and borrow a copy of the novel.

Not surprisingly the TV by and large follows the plot of the novel with some changes.  For example the novel has two doctors present at the examination of the body where the TV has just one.  The Darcys have one son on TV (Fitzwilliam) and two in the book (Fitzwilliam and Charles with Elizabeth announcing that she is again pregnant at the end of the novel)

James sets the novel in 1803 - 1804 and states that in 1803 Darcy and Elizabeth had been married for six years making the events of PRIDE AND PREJUDICE in 1797.  According to Win's Crossover Chronology P&P takes place in 1793.  The dating is irrelevant to the plot offers no problem in adding the story to the Wold Newton continuity.

Both are speculative and can be ignored if so desired.

However James does make references to the Elliot Family from Persuasion and Mrs Knightley from Emma both other novels by Jane Austen.

The book is a good read and I wouldn't object to more of  the Darcys as investigators, James sets this ups nicely as Mr Darcy is a local magistrate (it is only due to his connection to the crime that Darcy did not investigate this crime) and the TV series gives Elizabeth more involvement in the investigation.

Posted by Brad Mengel at 7:02 PM No comments:

More by luck than good management the final episode of this miniseries aired on December 12 here in Australia so I sat down and binge watched all three episodes together on Wold Newton Day.

I'd heard of the P.D. James novel it was based on but I hadn't read it.  There are hints that someone was aware of Farmer's theories,  The Darcys have a son named Fitzwilliam after his father and during Wickham's trial there is mention of his service in the late 1790s which lines up with Farmer's dating

As a fan of the Colin Firth/Jennifer Ehle six episode Pride and Prejudice Miniseries from 1995, I was a little disappointed that the cast from that didn't return for this follow up but I can understand the difficulty with that given that Colin Firth seems to be in a heap of movies (especially excited for Kingsman: The Secret Service).

Matthew Rhys made a good Mr Darcy, older and wiser.  I wasn't as fond of Anna Maxwell Martin as Elizabeth Darcy, that comes more from the fact that I was madly in love with Jennifer Ehle than any problems with Martin's acting.  Jemma Coleman was a fun Lydia Wickham as was Matthew Goode as her husband.  And it was a pleasure to see Penelope Keith as Lady Catherine.

The idea of a murder in Pemberley isn't new (The Wild Hunstman by Win Scott Eckert, The six Mr & Mrs Darcy Mysteries by Carol Bebris) but I liked this story bringing Lydia and Mr Wickham back into the lives of the Darcys.  There was an extra darkness to some of the characters from the original novel but the events of the intervening years makes sense.

I also liked the new characters, Henry Alveston, a suitor for Georgiana Darcy and Sir Selwyn Hardcastle the magistrate and coroner investigating the murder with a history with the Darcy family. (one wonders if he was an ancestor to Judge Milton C Hardcastle from the 1980s TV series Hardcastle and McCormick).

I'll have read the book now but this was a nice way to spend Wold Newton Day.
Posted by Brad Mengel at 8:53 PM 3 comments:

If asked The Destroyer Series by Warren Murphy and Richard Sapir would have to rate as one of my favourite series of all time.

When the call went out for a new anthology of stories set in the Destroyer universe I quickly submitted a story "The Roads not Taken.".  Set in the Vietnam War, I tell the story of the first time that Remo ever heard of Sinanju.

There are 17 other stories in this anthology all from fellow fans and writers.


Currently the book is only available in hard copy at Amazon
Posted by Brad Mengel at 12:03 PM 5 comments: