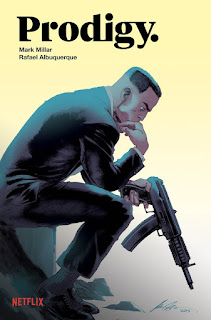 Mark Millar is a prolific writer, he's written for Marvel and DC before he branched off to his own creator owned studio, Millarworld.

He created Wanted, that was basis for the Angelina Jolie, James McAvoy movie (okay very thin basis), Kick-Ass and Hit Girl, and Kingsman (or as the comic was known The Secret Service).

I liked those properties both as movies and comics so I keep an eye on Millar stuff - I collected CLINT magazine which printed Kick- Ass 2 and Hit-Girl miniseries as well as The Secret Service and Supercrooks.

As a general rule, I prefer low to no powers in my comic stories (I'm a pulpy guy),  so some of his Millarworld stuff I can take or leave.

Then I saw a review of issue 1 of Prodigy, the second series from Millarworld after it was bought by Netflix.  The reviewer said that this was Millar riffing on Buckaroo Banzai.

Millar does Buckaroo Banzai - I'm down for that story.

I read each issue as it came out and finished this the first arc just last week..  I then went back and reread the whole series.

This series was a blast and a half - Edison Crane the Prodigy of the title is worthy to stand alongside Buckaroo Banzai, Doc Savage, The Destroyer, The Pretender, Sherlock Holmes,  Dillon and the Nekton Family from The Deep.

If you know me at all that's pretty high praise.

Ethan is a genius with a total recall, he owns a business and serves an unofficial troubleshooter. Like Banzai , he's off in a million directions at once - playing 18 simultanious games of chess, writing compositions, planning stunts, written three plays, created a new telecommunication system and a new cling wrap that keeps things fresh for a century. All before breakfast.

He's bored and decides to investigate unusual events in Australia. While there he;s approached by a CIA agent who explains that these events are part of a larger conspiracy.  Crane goes full Sherlock Holmes on her.  making deductions left,  right and centre.

Before you know it Crane and CIA agent Rachel Straks are globehopping looking for an ancient text that might be the key to it all.

The fitth issues ends with a twist that plays out nicely in the final installment.  I did not see it coming but I feel that Millar didn't play fair with the reader, Crane saw the twist coming because he had knowledge that we, the reader, weren't privvy to.

But damn if I didn't care because it was worth it see Crane bring down the bad guys.  because he is a dozen steps ahead of our villains - it was almost a reverse Watchmen.  Crane discovers the plot and goes yeah I figured it out thrity five minutes ago and made adjustments to foil your plot.  Oh and here's your handcuffs back.

I can't say more without spoiling it.

Give Prodigy a try if you like Doc Savage or Buckaroo Banzai and I look forward to the inevitable Netflix adaptation.
Posted by Brad Mengel at 12:03 AM