Girl Factory #3 The Man Made Woman by Robert Franklin Murphy

So I have previously reviewed Book ! and Book 2 in this series.

Back when I was researching book series for Serial Vigilantes of Paperback Fiction (avaialbel from Amazon as hard copy and e-book)  a decade ago, part of my goal to to provide complete series lists for Serial Vigilante series.  Finding these lists not as easy as you would think.  The books would sometimes have ads  and series lists in either the front or the back of the books but they weren't complete.  Making things ever more difficult is that different editons ( such as the United Kingdom) may changed the series order or give the book  a new title .

I had the British edition of book 1 The Girl Factory and presumed that the American editorn was called The Man-Made Woman.  All good.  I also had the UK edition for King's Mate.I couldn't find anything to contradict that on line or anywhere else.  So I figured I had the complete series.

In 2014., I post the review for The Girl Factory, I get a comment from Tom Johnson asking about The Man Made Woman.

I decide to double check, as I joke if it's not on the internet come back in six months,  and I find the entry for Su-Lin Kelly on the Spy Guys and Glas website and The Man Made Woman is the third book in the series.  So off I go questing to find the thrd book.  Finally I find a copy for sale this year and it is reasonably priced.

I admit I had a couple of reservations about this book.  The first book revealed that Su-Lin was a clone.  The second has Su-Lin die and be cloned again.  my worry was that the cloning would be a major part of the series.

The cover did not ecourge me: 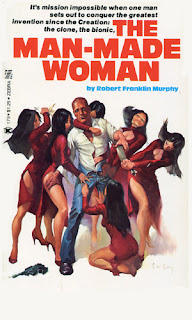 With Six different Su-Lin Kellys on the cover

Hands Off!  What do you do if you're a man an women just won't stop chasing you? If they just can't keep their hands off you? Give in? Or try to kill them off, one by one , after savouring each first?  DO you plunge your knife in, shoot your gun, prick tehm with a poison tip, or blow them up? And what do you do when you end up with as many as you started with? Do you accept it and say you're irresistable, they keep coming back for more? Or do you admit you have problem - one so big no single man or government can get a hold on it? What do you do when you are dealing science's greatest creation since man .. the clone, the bionic - the man- made woman."

Umm, I'm not sure what book the copy writer read becasue that is nothing like the actual book.  I have to admit that I am intrigued by that book.  (just for the record Su-Lin is not bionic)

No this book has a villian with trained sex snakes who act as his bodyguard. I repeat SEX SNAKES.

The story revolves around teh Chinese annexation of Tibet, where the Shan-Tal closter is located.  The Chinese are finding that parts of Tbet are not as easy to take over as they thought.  The villiage of Lhatse has the Dham D'hab Lama and is a hold out against Chinese rule.  Lhatse is close to the Shan Tal Cloister and allows the clositer to remain independant.

Wu Cho acting on behalf of the Chinese government is trying to kidnap or kill the Dham D'hab.  Wu Cho has the bodyguard sex snakes,  He is assisted by a beautiful woman.

American intellegence, in a leap of deduction, figure that Su-Lin Kelly is a beautiful woman who comes from Tibet so she must be helping Wu Cho even though she has worked for America in the past.  The secret intellenge agency The Nest, who have wored with Su Lin in the past try to presuade them otherwise.

The story then has Su-Lin and her team working to save the Dham D'hab and discover that Cho's female assistant is Le Kahn.   Le Kahn grew up with Su Lin in the Shan Tal Cloister.  And we discover that Le  Kahn is the clone of Su-Lin's sister, who died in the womb when the original Su-Lin and her family were all murdered at the hands of bandits.

I really enjoyed this book - Wu Cho is an interesting villian helping the Chinese for vast sums of money.  Le Kahn makes for a  good match for Su-Lin as the two women know each other so well.

I'm glad that there was another Girl Factory book to read.